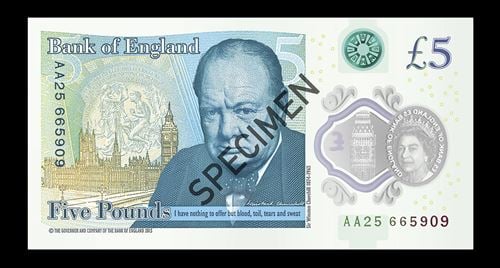 The new five pound note, featuring Winston Churchill, is released today and there are some major changes. Here is everything that is you need to know.

The new five pound note is plastic, polymer to be more precise, a thin and flexible plastic. It’s the first ever Bank of England note to be printed on polymer and is 15% smaller than its predecessor.

Tribute to The British Bulldog

The new note pays tribute to wartime Prime Minster Sir Winston Churchill. His image is taken from a photo taken in Ottawa, Canada, by portrait photographer Yousuf Karsh on December 30, 1941.

An image of his Nobel Peace Prize medal he was awarded in 1953 for literature will appear on the background of the note, complete with the wording of the prize citation.

The five pound note will also include an image of Westminster and Big Ben taken form the South Bank in London, looking out across Westminster Bridge.

Big Ben’s clock face will be fixed a 3pm, the approximate time on May 13, 1940, when Churchill gave a speech to the Commons in which he said “I have nothing to offer but blood, toil, tears and sweat.”

The declaration will be printed below his portrait .

The note is described by bank chief’s as cleaner, safer, stronger and more durable. It will be resistant to dirt and moisture, with each note expected to last five years longer than the current paper note.

The new security features include a see-through portrait of the Queen with a colour changing boarder, gold and silver foil representations of Big Ben, three holgrams, micro-lettering and raised print.

The Bank of England said the new note would be even harder to counterfeit. Features include a hologram of the word ‘Five’ which changes to ‘Pounds’ when tilted, a hologram of the crown which appears in 3D and muti-coloured when the note is tilted and a green foil hologram of the maze at Blenheim Palace, Sir Winston’s birthplace and ancestral home.

May 2017 deadline for the old note

The new fiver comes into circulation today (September 13), with the paper version slowly withdrawn from then. You have until May next year to use any old notes, at which point they’ll cease to be legal tender.

You will still be able to exchange them at the Bank of England, but unable to spend in shops etc.

Better for the environment

The new notes are much more environmentally-friendly. They will last longer, fewer will need to be printed, meaning less energy used in the manufacturing and transportation of them.

When a polymer note has reached the end of its life, it will be recycled.

A polymer version of the £10 note will enter circulation next summer, featuring Jane Austin, followed by a new polymer £20 note due to be released by 2020, which will feature J.M.W Turner.

Scottish banks will also be printing their next £5 and £10 notes on polymer. Clydesdale Bank is issuing the polymer fiver on September 15, the Bank of Scotland on October 4 and RBS in November.

There no plans at the moment to to replace the £50 note.

To help vision impaired people distinguish between the different notes, the new notes will retain tiered sizing and include bold numerals and similar colour palettes to the current notes.

With those sorts of figures in mind, it’s time we moved on to something more durable. We can all wave goodbye to the tatty old five pound note!

Are you glad to see the back of paper notes?

What Does The Bank Of England Interest Rate Drop Mean For You?

What Does The Bank Of England Interest Rate Drop Mean For You?How does withdrawing cash from a credit card affect your credit score?